What’s happening on the real estate market in Central and Eastern Europe?
Udostępnij 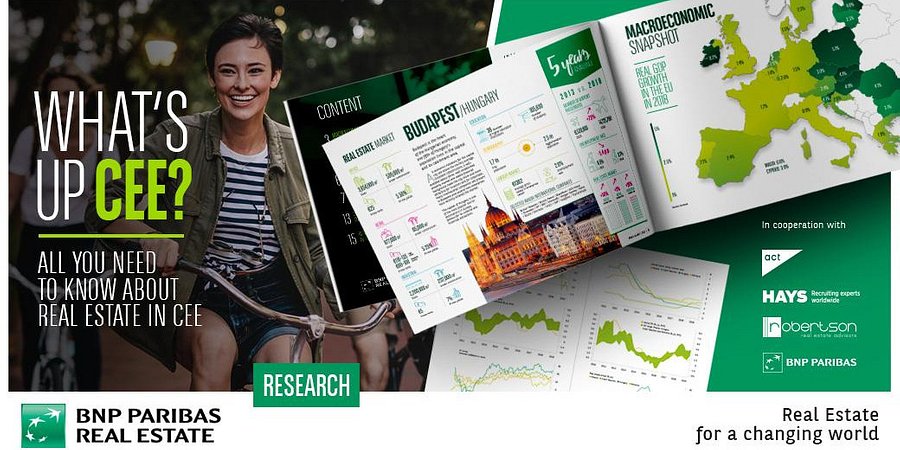 What’s happening on the real estate market in Central and Eastern Europe?

External investors from the European, American and Asian markets have been showing unwavering interest in the real estate market in Central and Eastern Europe for the past few years now. The region remains attractive for entities looking for opportunities to diversify their capital. Experts at BNP Paribas Real Estate Poland carried out an analysis of the current situation and the changes that had occurred in the past five years in four countries: Poland, Czech Republic, Romania and Hungary. In undertaking the assessment they moved beyond the commercial real estate market and collaborated with a range of partners: BNP Paribas Bank Polska, the act legal law firm, the recruitment services market leader HAYS, and Robertson, BNP Paribas Real Estate’s business partner in Hungary.

2018 saw the establishment of a new record in respect of the total volume of investment transactions concluded on the commercial real estate market for a second consecutive year. The first half of 2019 was also record-breaking, which is a good prognosis for the results expected for the entire current year.

The dynamic growth that has taken place over the past five years reinforced the positive perception of the commercial real estate market in Central and Eastern Europe amongst investors. Compared with the mature markets in Western Europe, cap rates in our part of Europe are significantly higher. At the same time, the region has good availability of top quality schemes and highly skilled workforce

BNP Paribas Real Estate Poland developed a profile of eleven cities within the region with a population in excess of 400 000 residents. As a result of the collaboration with partners from different market sectors, the report provides readers with an insight into the main economic indicators and trends occurring across the region’s countries and the various sectors of the real estate market. In addition, it highlights the trends prevailing on the labour market and gives  readers the opportunity to learn about the legal changes that had taken place in the commercial real estate sector in the region.

In addition to the real estate market data, we attempted to present all significant changes that had occurred in the region’s leading cities over the past five years. The comparison enabled us to demonstrate how rapidly the markets across Central and Eastern Europe have been growing, which is something that foreign customers frequently ask about as they are becoming increasingly interested in our region’s potential

The drivers for economic growth in the region are high consumption, the positive situation on the labour market, significant investment volumes and the influx of capital from European funds. The relatively low labour costs compared with those on the markets in Western Europe and the positive results recorded by the industrial sector help to maintain the region’s competitive advantage. Investors have consistently shown growing interest in industrial space for logistics and industrial use in CEE countries. Investments in BTS facilities now hold a significant share in the market and there are the first signs of investor interest in self-storage schemes. Office schemes remain popular with investors, with an increasing number of sizeable transactions being concluded in regional hubs, outside of the capital cities. As far as the retail sector is concerned, properties from the convenience segment of the market are gaining in attractiveness, with interest in them shown by local and foreign investors. The increasing role played by the formerly niche asset classes, such as hotels, homes for the elderly, student housing, rental flats and mixed-use assets, is also noteworthy as their market share is gradually growing at the moment.

These trends are corroborated by the large number of completed and pipeline projects. We can see a growing interest in projects that shape the urban fabric and combine different functions (office, retail and hotel), often utilizing historic parts of the cities in which they are developed. The majority of investors are also looking for locations for warehouse projects, which stems from the dynamic development of the logistics sector

Michał Wielhorski, Managing Partner and leader of the real estate practice area in the Warsaw office at act legal (BSWW)

As part of the report, the act legal law firm shared its insights into the trends prevailing on the commercial real estate market in Central and Eastern Europe and provided a commentary on the recent legal and fiscal changes that may be of interest from investors’ point of view.

Investor activity is particularly evident in the hotel sector, with sites suitable for hotel developments attracting great interest over the past year. International hotel chains are becoming active on those CEE markets on which they had not been present until recently, where they are frequently not only leasing but also buying properties. New brands and hotel concepts entered the Polish market this year. There are also investors interested in creating hostel chains well-thought-out in terms of location and breaking away from the not very positive hostel stereotype

Marek Wojnar, Managing Partner and leader of the real estate practice area in the Warsaw office at act legal (BSWW)

In conclusion, the multitude of investment products and the favourable economic conditions prevailing in the CEE region mean that, despite the expected slowdown on the European market, we remain optimistic about the future developments in our region

Bolesław Kołodziejczyk joins commercial property consultancy company BNP Paribas Real Estate Poland as an expert with responsibility for market analyses and research and strategic consulting. He will be appointed to the team led by Justyna Magrzyk-Flemming as Business an...

Ekol Logistics extended the lease of warehouse space near Poznań

Ekol Logistics decided to continue its cooperation with REINO IO Logistics by extending the lease of warehouse space in Poznan, Koninek.

Logistics is growing, but the first signs of slowdown are visible on the horizon

The market for logistic, warehouse and industrial space is undergoing dynamic changes. Authors of the BNP Paribas Real Estate Poland’s quarterly report point out to a continued high take up, accompanied by low vacancy rates prevailing for a long time, and more recently, ...

Starting at the beginning of December, Małgorzata Fibakiewicz will lead the Office Agency, and Justyna Magrzyk-Flemming will become the Head of Business Services. The designations result from the company strategy reliant on rapid and flexible adjustment to the customer’s...